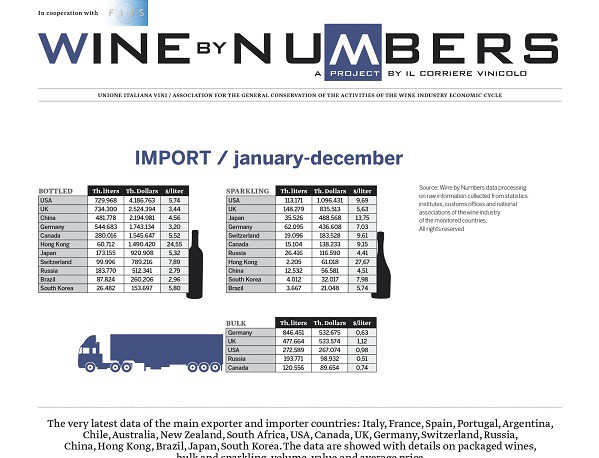 Get the new edition of Wine by Numbers, totally free for download

In comparison with the trend of the quarter closed in September, the final part of 2016 registered a slight improvement with regard to the performance indicators. The final three months closed with a positive balance: +3% in volume terms (9.4 million hectolitres) and values over 4.4 billion US dollars, thus reporting a substantial stability compared with the corresponding period of 2015 and considerably improving the -4% recorded in September.

Taking the whole year into account, in value terms, therefore we registered two positive quarters (the first and the second one), then a negative trend in the third quarter and a re-alignment in the last phase (-1%), for a total final balance of 16.3 billion US dollars, corresponding to a moderate annual growth versus 2015 (+1%) and highlighting a standstill over the last five years (below 1%).

Volumes show a better situation: 34 million hectolitres cumulated at a yearly +1% and +1% over five years. Here it was mostly Asia that compensated for the decreases of the European bloc, as well as the American stability, accelerating in the fourth quarter, which closed at +3%. Unlike values, volumes marked only one negative quarter (the third one).

Only volumes are thus speeding up and the indicators of the average prices show it clearly: the European bloc, oscillating in the 4-dollar per litre range between 2012 and 2014, has gradually dropped to an average of 3.50. The same decrease level concerned the American bloc, fallen down from an average of 6 to 5.50, despite the ongoing re-balancing in the Euro/Dollar exchange rate. The biggest collapse concerned the Asian continent, which is the only one that is thriving, all things considered: from an average of 7 dollars, it dropped to 6 per litre. However, the decreasing trend shown by the Americas and Europe is constant, whereas the Asian one has up-and-down peaks, where the fluctuating performances of Yen and Yuan have a considerable impact on the American Dollar. If we had to bet on something, we would choose the 6-dollar range as the most suitable one to represent the continent.

As a result of these asymmetries, if we had to indicate a worldwide price average, surely we could say that there has been a 50-cent decrease, with the current trend (and maybe occurring in the next future) to remain closer to 4.50 rather than to 5 dollars.

The European aggregate – including the UK, Germany, Switzerland and Russia – recovered in volume terms, after a downturn in the third quarter; it almost reached the zero line on which it had kept afloat since the beginning of the year. Even values are back to the levels of the first six months of the year, closing the fourth quarter at around -5%, corresponding to a little less than 1.7 million hectolitres.

The final annual balance for the European bloc is however negative: -2.4% in volumes and -6% in values, whereas, extending the view over the last five years, the negative balance remains the same.

Obviously, it is Russia to play a leading role in these difficult dynamics: even if it gradually recovered in respect to the very bad indicators of 2015, it closed the five-year balance with over 8% loss as CAGR. Nevertheless, on the Russian front, the year 2016 closed positively compared to 2015: Italy and France are stable, whereas a strong increase is reported in the imports from Spain and Georgia, which is back to the historical role it had previously played before the embargoes due to the past armed conflicts.

Entering the continent, German dynamics are rather difficult: the annual balance closed negatively, more in volumes (-7%) than in values. The top four countries in the suppliers’ ranking, obviously including Italy, are all below zero, whereas the first positive sign is related to the neighbouring Austria. It is to be stressed that the downturn, at least for Italy, is not new: over the last five years the lost wine litres were almost 40 million, even if it is to be pointed out that the average price of our bottled wine increased by 5%. This is not extraordinary, considering that we are speaking of 2.80 euro per litre, from which the annual rate of inflation is to be subtracted.

For Switzerland, the annual balance can be defined as positive, in particular with regard to Italy that stabilized its leadership in a market where German and American wines are having new impetus. The trend curve of average prices is particularly worth mentioning: if we observe what happened over the last four years, it seems we experienced a general re-alignment of the first three European suppliers, almost forcedly channelled into an average of 7/8 CHF/litre, including France, which from the 18 CHF of three years ago is now at around 11.

Situation in the UK: the annual balance closed badly for all suppliers, in particular for Bordeaux and for Italy, which combined a general volume loss (-4%) with a -18% on the shipments of white P.G.I. wines, including a large part of Pinot grigio, (a total of 320,000 hectolitres). To compensate for this downturn there was a positive trend of the Veneto white P.D.O. wines, also including Pinot grigio (+42%, a total of 170,000 hectolitres), whereas on the red wine front, the Tuscany wines (+23%, 58,000 hectolitres) and Piedmont wines (+13%, 40,000 hectolitres) went up.

For the rest, in general all European countries had bad performances, whereas a growth is highlighted (and not since yesterday) in New Zealand, Chile and especially in Argentina. Australia stabilized its recovered positive sign with regard to wine bottled on site, which finally found a balance in respect to bulk wine, thus confirming the reversal of a long-standing trend.

After starting at +3% and with a fluctuating trend, the situation is exactly back to the starting point, with the fourth quarter reaching 2.9 million hectolitres and a value of 1.6 billion dollars, corresponding to a 4% growth compared to the same quarter of 2015. There was an improvement, especially in value terms, compared with the trend shown during the first nine months, remaining between 0 and -3%. In this connection, the dynamics of the currencies had a considerable impact. Actually, from September onwards the Dollar/Euro exchange rate started again to rise over 0.90, interrupting a “Bear phase” of the European currency that had remarkably contributed to the competitiveness of Italian, French and Spanish products in the American market.

The American continental bloc – USA, Canada and Brazil – thus closed the year at 11 million hectolitres, registering a 1% increase versus 2015, whereas in value terms the balance is zero: less than 6 billion dollars, far from the 6.2 in the two-year period 2013/14. In the long-term, the currency trend shows a moderate growth, a little over 0.5%, whereas volumes are below 2%.

In the United States, while Italy maintained its stability, there was a moderate recovery of French wines and a powerful upturn of those from New Zealand, now very close to the Australian cousins and selling at almost the double average price. A negative trend curve is shown by Argentinean and Chilean wines: for the first ones this is a worrying matter, because at the moment there are no alternatives to this market. On the contrary, Chile did very well in compensating for the structural decreases in the USA with Asian sales.

In Canada, the general balance sounds like catching breath after an excellent 2015, when the absolute record of 2.8 million hectolitres had been achieved, crowning an uninterrupted growth since 2006: -1% in volumes and only +1,5% in values, these also generated by the exchange rate dynamics with the Euro. American and Italian wines remained at a standstill, whereas the French ones recovered. Even here a bad performance was reported by Argentina, whose Malbec wave ran ashore too early in respect to the expectations of few years ago. On the rise were the Chilean wines and mostly – here too – the wines from New Zealand, top performers of the market. Again there was another of the numerous decreases of Australian wines that only 10 years ago were struggling for volume leadership with French and Italian wines. It seems a long time ago.

Finally, let us talk about Brazil: the year had started rather badly, then it turned out to be a transition period: in volume terms there was a growth, thanks to the leading duo Chile-Argentina, whereas a strong drop was recorded in values, especially in the average price column, owing to the Real vicissitudes. Italy closed negatively and it is the only one among the big European suppliers: in the long-term, after reaching the maximum in the two-year period 2010/11 (12 million litres), the trend curve saw a descending parabola until 2013 to 8 million. From this position Italians never moved up, allowing the Portuguese to surpass them: strangely enough, they achieved the same entry price.

Just in price terms, as we have seen for Switzerland, it seems there is a tendency to funnelling at the threshold of 3 dollars per litre, where the Chileans are leaders: even the French that only two years ago were audaciously close to 8 dollars are now fallen down to exactly half the price. It is a market to be completely reset.

Among the three continental blocs, the Asian one remains the absolute top performer, driven by the progression of the Chinese market. The last quarter of 2016 sees a volume recovery with a +12% balance, after three consecutive quarters showing a strong slowdown of imports. On the other hand, with regard to values, sore points remain, due to the negative trend of the Japanese market and to the progressive weakening of the Yuan that forced importers  to “jump through hoops” to keep the threshold of purchase volumes high. The fourth quarter thus sank to a negative sign (-2%) and this is the first time: from +30% between the end of 2015 and the beginning of 2016, down to +15% in June, then +6% in September and the current negative outcome to close a year that is nevertheless positive, – considering the 12 months – attaining +11% versus 2015 in volume and value terms and about +8% over the last five years.

Now, let us observe China: as mentioned, on the value side, difficulties continued all over the year, with the fourth quarter finally resulting worse than the first three ones and a change of only +10% confirming the impasse and the decline started in March. However, the annual balance closed positively: +22% in volume terms (4.8 million hectolitres) and +17% with regard to values (2.2 billion dollars), with great performances in all the major supplying countries: Italy is the only one to have a less strong pace trend, achieving only +14% versus +32% of Spain and +40% of Australia.

In the long term, compared to Chile and Spain, the Italian curve is strictly tied to the 5-6 million litres per quarter, whereas its competitors went from this level registered in 2012 to the 15/17-million range. It is to be underlined that the only one to grow, in value terms with regard to price per product unit, was precisely Italy that has now been steadily selling slightly at over 4 dollars per litre, versus quarterly averages of 2 dollars for the Spanish and 3.50 for the South Americans.

On the Japanese market, the year’s closing is negative on both sides: -7% in volumes, with Italy losing the same volume percentage, and -13% in value terms. Even here Italians are aligned with the averages, also involving Chileans and French. It is the first time since 2012 that the year closed on the decrease, whereas until 2015 we had at least remained rather regularly around 1.8 million hectolitres. The first strong signs that Japanese market has entered a negative spiral already had come in September, which had closed at -13%, a downturn then confirmed in the last year’s quarter. On the value front, compared to the -23% registered in the third quarter there was a slight recovery, about 6 points, so that, by observing the record of trend curves, the last quarter of 2016 seems to have played the role of barrier against a collapse that did not seem to stop. In March, with the final balance of the first quarter 2017, we will see whether from here onwards the market really rebounds.

To see the charts and all the figures, get the new edition of Wine by Numbers Quarterly Edition, totally free for download: click here