The long wave of the crisis overloads the world wine trade 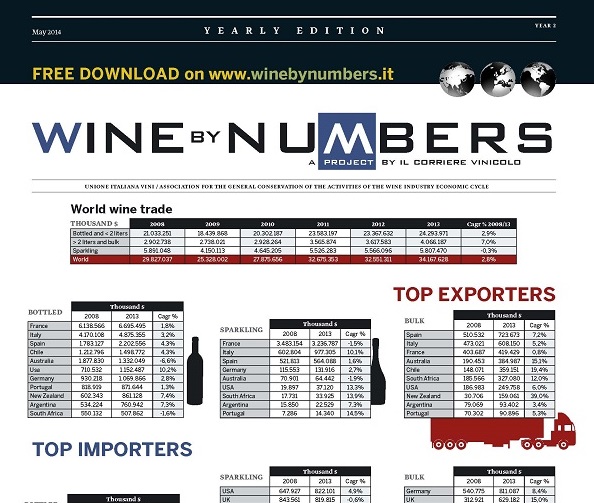 Though in 2013 the global value grew up (+5%, 34 billion US$), as from 2009 the pace reduced by 3 pp, compared to the 4 years ended in 2008. Main countries performances and analysis led by our digital magazine Wine by Numbers, for free download

In 2013 the global wine trade balance has been positive, with a total amount of export up to 34 billion US (+5% on 2012). Nevertheless, the long term data analysis shows that the growth has not returned to the pace we’ve registered before the burst of the international bubble. Between 2004 and 2008, in fact, the cumulative performance measured as Cagr was up to +11%; from 2009 (when the crisis involved the wine industry) to 2013 the growth flattened out at about +8%.

These are the main results emerging from the analysis of the global wine exchanges made by Corriere Vinicolo, press media of Unione Italiana Vini, via Wine by Numbers, digital magazine available for free, which analyses the main importers and exporters performances in the period 2008-2013 (sparkling wines, packaged wines, bulk wines).

Two typologies are hardly involved in this slowing-down trend: packaged wines, with cumulative growth of +10% in 2004-2008 reduced to +7% in the post-crisis period. Even worse the sparkling wines, suffering the drastic reduction of Champagne shipping: all the growth made until 2008 (+15%) has been halved, ending with a post-crisis balance of +9%.

Not even bulk wine trade is saved, even if “warped” for a year – 2013 – where the prices of European products soared sky-high: a reduction of 2 pp between the two periods.

Focusing to the packaged wines segment (not including the sparkling ones), it is noticeable that the tendency to reduction of value increase involves all most important suppliers. The only exception is the United States, coming from +3% cumulated in the period before the crisis to +18% in the post-crisis. Clearly, is paying back the strategy of placement in countries where the crisis was not felt at all, such as Canada where the Californian became the first wine suppliers in 2013.

On the other hand, for all the other countries, the performance reduced: for some of them in a drastic way, even landing in degrowth, such as Australia and South Africa; for other countries, the impact was softer. Italy has experienced years of great expansion, but now the country is in the middle: value growth loses 3 percentage points (from +9% to +6%). This means a worse performance than France, losing just 2 points of growth (to 8%), and Spain. The Spanish data are remarkable: the growth between the two periods is confirmed (+9%), with a performance of 3 percentage points bigger than Italy. Spanish invaded the markets with low-priced wines, a strategy that could be profitable in the short time – especially in periods of crisis – but potentially dangerous on the long term.

Remaining in Europe, Portugal’s paces go bad (4 differential points), and Germany too, with a loss of 10 points of growth.

Chile and Argentina show quite disappointing performance. In the post-crisis period Chilean are aligned with Italy (+6%), while Mendoza goes up to 7%. The point of view changes comparing the cumulative performance in the two periods, before and after crisis: Chilean growth was +13%, even better the ambitious Argentinian, +25%. So, for both of them the five years after crisis show uncertain signs: Argentina seems placed in a better position, having a growing prices trend. But the uncertainty of the inner situation, with a rampant inflation, doesn’t show something good.

The Australian and South American crisis

In Australia there is a feeling of uncertainty: the difference between “before” and “after crisis” period doesn’t exist at all. The 2004-2008 already marked a first sudden stop, with a cumulative data below +1%. Even worse the performance in the post-crisis, with a degrowth of 3%, the worst performance among the main Countries, partially counterbalanced by the strategy of bulk wine shipping to UK.

Joined with Australia – just because sharing UK as first client – is the South African industry: from +6%  cumulated until 2008, value growth went down to zero; a performance someway softened by the positive trend in 2013, supported by the feeble Rand. The balance would be worse if the Cagr calculation would stop to 2012, when the export value reached the bottom.

As for the little New Zealand: after a very negative 2009, the trend has been inverted, with a multi-year growth up to 10%. A vague copy than +28% of the period before bubble, but a sign of a comforting new start, anyway.