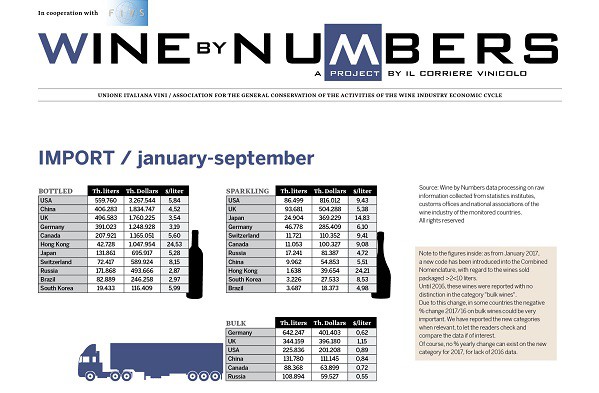 Get the latest edition of Wine by Numbers for free: import-export, main countries, bottled, sparkling and bulk wines

Another jump was reported in the trade of bottled wine worldwide: the aggregate monitored by our magazine in the period July-September exceeded the threshold of 9 million hectolitres of product for the second time, showing an 8% growth versus the corresponding (negative) quarter of 2016.

The values, expressed in US dollars and thus considerably influenced by the weakness of the American currency against the Euro, jumped up by 14%, reaching 4.5 billion US dollars, compared to the third quarter of 2016, which – due to the Bull phase of the US dollar – had decreased to -3%. Basically, we can say that – despite the misfortunes of the currencies – sales volumes are keeping up, obviously thanks to the balancing provided by the Asian continent (and, in particular, by China) and to the increasingly strong and constant recovery of the Russian market, which is counterbalancing the German and British stagnation in the continent.

Besides these dynamics, the amount cumulated since January scored a +5% in volumes and values versus 2016, with volumes reaching 25.8 million hectolitres (the highest volume figure since 2012) and values a little lower than 12.5 billion US dollar, in line with years of weak US Dollar.

With regard to the average prices, in the Asian continent they have been stable at 6 US dollar per litre since the last quarter, whereas there was a general growth in the Americas, where prices registered a 10-cent increase from 5.50 US dollar. As far as the European bloc is concerned, average prices are moving between 3.50-3.70 US dollar.