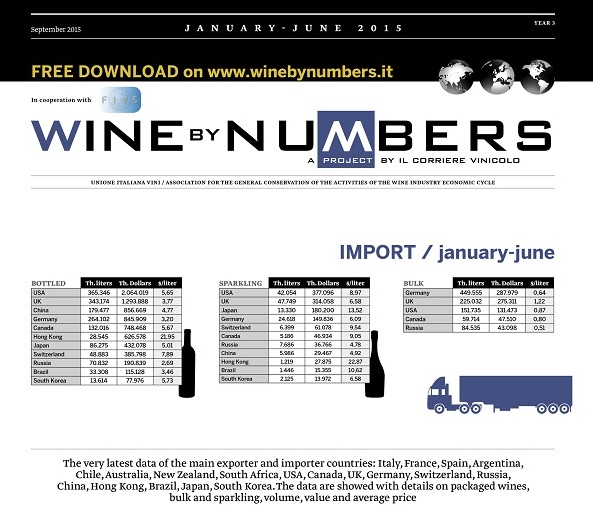 In the second quarter of 2015, the total amount of bottled wine exchange has been equal to 4.1 billion US$, -7% compared to the same period of 2014. Get the last edition of Wine by Numbers for free, with the detailed data of all countries

World import did not improve in June. In the second quarter of 2015, the total amount of bottled wine exchange (sparkling excluded) monitored by us has been equal to 4.1 billion US$, that being -7% compared to the same period of 2014. In the first quarter of the year we had the same trend, and we commented “the worst quarterly performance ever since 2013, with a progressive slowdown witnessed from 3Q 2014 till now”. But – as we can see the glass half-full – we may say it did not get worse.

Worst doing is Europe (sum of Germany, UK, Switzerland and Russia), which confirms the -20% of the first quarter of 2015.

The Americas (USA, Canada and Brazil) did not get over 1.6 billion US$, thus worsening their already poor 1Q 2015 performance by -5%.

The region that improved more within the 2Q has been Asia (China, Japan, Hong Kong, South Korea), with Chinese performance hitting a new record: for the first time ever, the total amount imported in the monitored area is equal to 1 billion US$, +15%.

Average prices have been reducing sharply in Europe, mainly because of the troubled Russian market, minimum levels being registered since 2012 (3.68 US$ per liter). Prices are quite steady in Americas (5.50 US$) while in Asia the bigger amounts of volume imported had negative consequences on prices, holding them down to 6.34 US$ (6.63 in March).

The aggregate total – strongly influenced by the situation in Europe and the trends in Asia – falls down to 4.82 US$ per liter, that being -3% compared to January-March 2015.

Get the last edition of Wine by Numbers Quarterly for free, with the detailed data of all countries. Click here